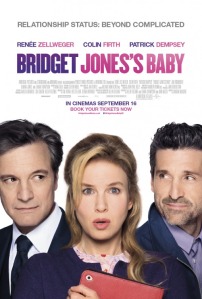 Bridget’s (Renee Zellweger) focus on single life and her career is interrupted when she finds herself pregnant, but with one hitch . . . she can only be fifty percent sure of the identity of her baby’s father.

My initial reaction when my mum asked if I would take her to see the latest offering of Bridget Jones.

However, grumbling and jokes aside, I have to say that I was pleasantly surprised. An easygoing and very entertaining affair. Probably the best one out of the bunch. Has it really been 12 years since the shambolic sequel that was The Edge of Reason?

I actually didn’t mind the first film. It was silly BUT fun. The second one, however, was terrible. It was overlong, OTT and did exactly the same thing as the first BUT with much weaker results. And now we join Bridget in her 40s and starting all over again.

The first time that Zellweger didn’t put on the weight. Controversial? It hardly made a difference as she still nailed it as the bumbling singleton desperate to get her life in order. Finally reaching her ideal size and having fun. Cheesy BUT watchable.

Of course the questions came flying in; what happened with Mr Darcy? Where’s Hugh Grant? (I mean obviously, I wasn’t thinking that. Cough. Moving on . . . )

Colin Firth is looking old BUT he still delivered the charm as Mark. He had great chemistry with Zellweger yet again as the pair must awkwardly face each other within their social gatherings. It wasn’t long before the old feelings came back. Although you could sense the inevitable coming, it wasn’t quite as straightforward with the pair’s reunion also opening old wounds.

Patrick Dempsey (Grey’s Anatomy) certainly made one of the cheesiest introductions as Bridget’s new Prince Charming (I’m sure the Enchanted fans got a laugh out of that reference in the film. BUT not me. Because I haven’t seen Enchanted. Cough). Rescuing her from the muddy swamp of a music festival.

The festival sequence served up an unexpected cameo from a certain red headed musician that just won’t disappear BUT entertaining none the less.

Dempsey played the part of the sickly sweet Jack well. A bi-polar opposite to the robotic Mr Darcy. He had good chemistry with Zellweger as a new romance blossomed between the pair.

Emma Thompson was on scene stealing form in her (tragically) small supporting role as Dr Rawlings. I had to laugh when she had to announce the sex of the baby to both “fathers”. Her enthusiasm wading with each encounter as Bridget desperately tried to hide the truth from the pair.

The sparring between the two “fathers” was quite entertaining with both desperate to win Bridget’s affection. I’m sure there were Team Jack and Team Darcy divides going on through out the film. It made for some heartfelt drama and genuine laugh out loud moments. Especially during the pregnancy sequence. I was in stitches. They must have had fun filming that.

I haven’t read the books so I can’t say if the film stayed true to the material BUT it may relieve fans knowing that author Helen Fielding was involved heavily in the screen adaptation with the aid of writers Dan Mazer and Emma Thompson. That’s probably why this sequel worked a lot better.

Fielding and co. brought back a lot of the old faces and everybody got their moment to shine. “Oh my God, you had a three way?!” I wish Gemma Jones (Sense and Sensibility) and Jim Broadbent (Harry Potter) were in it more as Bridget’s parents.

Typical parents. Unable to work technology; their FaceTime phone chat would have been something my parents would have done. BUT always there to help in their strange way. Jones’ overreactions cracked me up. Afraid that Bridget’s unwed pregnancy would cause scandal over her local council election.

We were also rewarded with some new faces. Sarah Solemani (Him & Her) was brilliant as Bridget’s new BFF and partner in crime Miranda. Their news room shenanigans and in between live shot conversations delivered all sorts of cringe-inducing moments that delivered the laughs.

I wasn’t bored and was quite engaged in the love triangle. Wondering who Bridget would choose in the end. Would Mr Darcy fail again? Was this Jack too good to be true? I liked the fact that they left you guessing right up to the very end on who was the father?

There were moments that were a little too corny and OTT for my liking. BUT it was always going to be that sort of film. Kate O’Flynn (Happy-Go-Lucky) was really annoying as Bridget’s new boss Alice. I’m sure that was supposed to be the point as the cutthroat boss looking to throw the old out for the new (which delivered an all too realistic generation clash) BUT she wasn’t that funny and got on my nerves.

It was easygoing fluff that delivered enough charm and drama to crack a smile from this cynical movie goer. I wondered why they bothered with another sequel that nobody asked for (Like most these days) BUT fans will love it and I have to say that even the skeptics might want to take a chance.