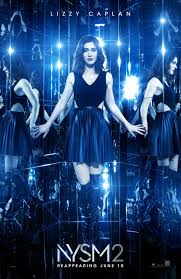 And now for my next trick. Watch a franchise that nobody wanted . . . DISAPPEAR!

The Four Horsemen resurface and are forcibly recruited by a tech genius to pull off their most impossible heist yet.

Now You See Me was an enjoyable romp. Hardly ground breaking BUT easy going fun with a group of magicians hustling some rich conglomerates. I didn’t expect the finale and was even more surprised when a sequel was confirmed.

I hoped the next outing would carry that same level of energy and fun BUT this was utterly dreadful. Irritating characters, drawn out pace, a terrible story line, farfetched stunts that pondered all levels of plausible acceptance and really shoddy CGI made this one to avoid.

It’s not essential to watch the first outing. You get the entire plot summarised in the first 30 seconds. The opening showed promise as we explored Dylan’s (Mark Ruffalo) past and the reason behind his rivalry with Thaddeus Bradley (Morgan Freeman).

BUT once it flashed forward to the present, the intrigue was lost. Eisenberg’s Atlas was far too serious and sulky. I don’t know whether he was still getting over losing his hair for the shambolic superhero saga that was Batman vs Superman BUT his griping and silly backstabbing antics were dull as dishwater.

We had a new Horseman, person or Female Horseman (Whatever) in Lizzy Caplan (Mean Girls). I thought she would be a worthy addition to the mix. BUT she was incredibly annoying. She wasn’t funny and her verbal diarrhoea was insufferable. I think Isla Fisher made the right decision not to come back.

What didn’t help was the agonizing pace. The film should have been cut by a good 30 minutes. Mark Ruffalo (Avengers) was the most interesting character and he was barely in it! Every time Dylan appeared, things happened and I was hooked. I was happy to follow his subplot NOT the Horsemen. Battling to keep his cover under the watchful eye of Sanaa Lathan (who was wasted in her role).

Proof in the pudding when one of the best scenes was Dylan causing havoc in a Chinese street brawl. The fight sequences combined with a series of magic tricks were well choreographed and stopped me fidgeting in my seat.

I have to admit the Horsemen really did infuriate me. Woody Harrelson had been on resurging form with his recent endeavours (True Detective) BUT this was a complete misstep. He went full retard as Merritt’s twin Chase with his Will Ferrell-esque wig and badly capped teeth. An unnecessary character that tested me in every scene.

Dave Franco (NERVE) did his best with his role BUT was lost in the mix. Eisenberg eventually lightened up and delivered his usual schtick BUT it was too little, too late.

You know you’re onto a loser when Morgan Freeman’s dulcet tones are doing your head in. His silky voice couldn’t save this leaden script. If anything, it highlighted the clunky exposition. A revelation about Bradley unintentionally undermined pretty much a good portion of the premise from the first one.

Daniel Radcliffe wasn’t too bad as the weasely Walter Mabry. He played the slimy techno villain well BUT he wasn’t in it enough. NOT even the return of Sir Michael Caine did anything for me. He was laughable. Doing his best Victor Meldrew impression. Dismal.

What made matters worse was that the actual hustle and magic tricks were far too OTT and farfetched for my liking. I know it’s only a movie BUT some of the big reveals defied physics or common sense to work even in a Hollywood universe.

An elongated card flinging sequence took the biscuit. Watching the gang flick a badly CGI’d card in the air and around their torsos to smuggle a computer chip was just plain terrible.

However, the finale delivered a little of what I expected from the get go. The effects actually did impress; especially when Eisenberg disappeared into a puddle of rain. Tense, engaging and watchable. WHERE WAS THIS FOR THE REST OF THE FILM?!

The characters were dull, the pace was too long, the effects were hit and miss and the twists were either too predictable or just plain ridiculous. They even missed a trick by not calling this Now You Don’t BUT if there any rumours for another; my title would be: