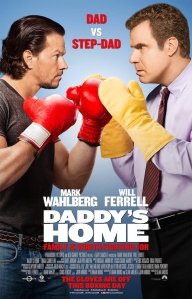 Daddy should have stayed away.

Marky Mark and Ron Burgundy take each other on in a mediocre reunion.

Stepdad, Brad Whitaker (Will Ferrell), is a radio host trying to get his stepchildren to love him and call him Dad. But his plans turn upside down when the biological father, Dusty Mayron (Mark Wahlberg) returns.

Not bad. If you’re expecting The Other Guys 2, you might be left a little disappointed. We open to a ridiculously OTT sequence with Ferrell’s sickly sweet Brad praising fatherhood. Well, step-fatherhood. He plays the dim-witted simpleton so well. It doesn’t even feel like the guy’s acting. He’s a natural. Happy to have a family even if his delightful step kids draw demented doodles of him with a knife in his head and “homeless man poop” for hair. His response? Relief. Relieved that he’s NO longer dead in the pictures.

It’s easygoing enough BUT not quite as laugh out loud or as engaging as I hoped. Things pick up when Wahlberg makes his introduction. The game afoot from the get go as Dusty leaves Brad waiting at the airport.

The pace dipped in and out as Brad’s naive step dad is repeatedly duped and manipulated by the ultra cool Dusty. The 12A rating restricted the pair from really pushing the envelope. I missed the random improv that they had in The Other Guys. Don’t get me wrong. They still had that chemistry and worked well off each other. If it wasn’t for them, I don’t think it would have worked.

The OTT stunts were stupid BUT delivered the laughs. Ferrell trying to showboat on a motorbike resorted in half the house being renovated. A back yard skate off drew some unexpected laughs BUT soon went on far too long. And that was the problem for me.

For every snappy one liner and crafty gag, there were a dozen duds. Thomas Haden Church’s (Sideways) radio producer was a mixed bag. If it wasn’t for his random stories that had no relevance, I would have cut him out altogether. The kids were funny. To be honest, they could have been in it more. The stunning Linda Cardellini (ER) was far too straight faced in this mad mess. The running gag with Griff (Hannibal Buress) the handyman overstayed its welcome like the character. Seriously, it really annoyed the hell out of me.

The whole “he’s better at you in every way” spiel was a little predictable. BUT that wasn’t to say that it didn’t deliver. Dusty’s fairy tale bed time story of the wicked step king wasn’t too bad and the endless battles to outdo each other on giving the kids presents or saying good night had a chuckle here and there.

Bobby Cannavale (Ant Man) was terrible in his cameo as a fertility doctor. Merely setting up a gag for the pair to draw swords (If you catch my drift). The recurring gag of Marky Mark without a shirt pops up yet again. It didn’t quite work as well as Date Night BUT I’m sure the ladies won’t be complaining. Performing crunches and lifts while Ferrell watches in awe.

Brad’s desperation to win the family back got the better laughs. His drunken meltdown at a basketball stadium had me in stitches. I may have shook my head at the nauseating father/daughter dance finale BUT I couldn’t resist the buffoonery of Wahlberg and Ferrell.

It did feel like a case of the “best bits in the trailer”. If you were lucky NOT to see them than it might be a bit more entertaining. It was all far too cheesy, OTT and a little slow at times. If NOT for Gamble and Hoitz, I mean Brad and Dusty, this would have been a write-off. It killed the time BUT not their best.