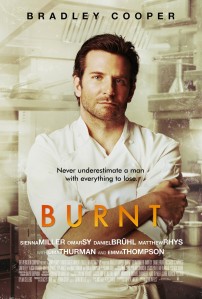 Adam Jones (Bradley Cooper) is a chef who destroyed his career with drugs and diva behavior. He cleans up and returns to London, determined to redeem himself by spearheading a top restaurant that can gain three Michelin stars.

Penned by Steven Knight. Normally, I’m a big fan of the chap. Dirty Pretty Things was one of the best British films I had seen in a long time. BUT his latest offerings (Locke and Peaky Blinders) were very disappointing. Locke was an unintentionally comical showcase for Tom Hardy while Peaky Blinders (A fantastic gangster series that I had once called the best damn thing on TV) suffered from a stuttering second season.

Unfortunately (if you hadn’t gathered from that poorly punned tagline) that run has continued. Bradley Cooper does his best Gordon Ramsey impression BUT to no avail.

The first hour was actually quite watchable after a slow opening act with Cooper’s callous chef serving his “penance” by shucking out a million oysters. Yep. It really was as tedious as you think. BUT I was still intrigued to find out what Adam had done to make people detest him so much. Apparently, not a lot.

I would have preferred to see Cooper’s character burn out in the opening half than witness the dull aftermath. Some of the reasons were a little petty and boring while most of the group forgave him far too easily just because of his “reputation”. Best described using a Star Wars reference, “If he gets one more Michelin star, he’ll be like the Darth Vader of cooking”.

Cooper played it well as always. He had enough charisma to carry the piece BUT for every tense scene or engaging moment, there were a dozen cliched ones. Matthew Rhys was perfect as Adam’s old sous-chef (now bitter rival). If anything, I wished he was in it more. Their exchanges and fractious relationship was ripe for more heated confrontations. Unfortunately Knight only really scraped the surface.

And that was the problem. A great cast not used to their full potential. I couldn’t believe the amount of actors that popped up in this film. It was ridiculous. Daniel Bruhl didn’t do a bad turn as Tony. The son of a respected restaurateur trying to keep his late father’s legacy alive. The only problem was that his initial stubbornness and anger was always going to lead to the inevitable.

It was also a surprise to see Uma Thurman as a respected food critic. Shame that her character was only a passing cameo. Alicia Vikander was tragically wasted in her role. She looked stunning and had potential to cause so much more trouble for Adam. BUT it was resolved far too easily and didn’t even attempt to put out the fire burning between Cooper and Miller.

Sienna Miller and Bradley Cooper reunite once again (American Sniper). Their tense headbutting and predictable romance did enough to keep things ticking over. Cooper’s Ramsey-esque meltdown at her was brutal and nail biting. Miller was actually very good as the single mum battling to keep her catering career alive. The hokum romance did spoil things BUT their chemistry was good enough to roll out the doughy bits.

Emma Thompson was brilliant as Adam’s therapist. But heavily underused. Merely dishing out advice and keeping tabs on the recovering drug addict. A shame as the pair worked well together.

There just wasn’t enough made of the story or the cast. The second half lulled and sizzled out with a quite abrupt and corny ending. It was far too patchy, formulaic and predictable. That’s not to say it wasn’t watchable. Just disappointing.