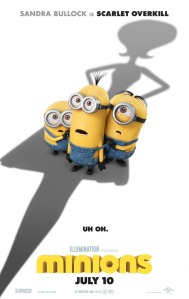 Not as despicable as I thought but nowhere near as good either. I know. Whaaatttttt?

This Minion fan was left feeling a little blue. For all the promise and the crazy cast, this lazy offering did enough to keep things watchable for the little ‘uns but failed to really make a mark like its predecessor.

Minions Stuart, Kevin and Bob (all voiced by Pierre Coffin) are recruited by Scarlet Overkill (Sandra Bullock), a super-villain who, alongside her inventor husband Herb (Jon Hamm), hatches a plot to take over the world.

As soon as the Universal logo emerged and those funny little yellow buffoons started humming the theme, I could feel a guilty smile spread across my face.

The animation was brilliant. The pace zipped along. The minions had enough charm and silliness to keep things lively. However, my smile soon faded as the opening 15 minutes were exactly like the heavily flogged and overlong trailers. If you were lucky enough not to see them then it’s fun enough. BUT for me all the best bits were spoiled.

I honestly thought that Gru had made the little yellow money makers. But it turns out they had been on this Earth long before man. The only surprise that I got from the film. That and the fact this script got through editing.

We watch the Minions as they desperately search for the biggest, baddest villain to serve and somehow manage to eliminate them instead. I did laugh at the gang as they knock a T-Rex into a volcano, blow Napoleon Bonaparte out of the sky and wipe out Count Dracula after opening the curtains during the day to surprise him with a birthday cake.

Geoffrey Rush’s voiceover was entertaining. If anything I wished there was more of it BUT there were only so many times the man could pronounce the word, “BA-NA-NA!” in a funny way. Thankfully, all the heavily flogged bits were wrapped up in that opening act.

And things did take a more interesting turn when the Nelson family were introduced. Michael Keaton and Alison Janney were on fine form. To be honest, I wish the Minions had stuck with them. They were mental!

I liked how you were able to tell Kevin, Stuart and Bob apart. Each with their own unique personality. Not bad considering they all sound the flipping same with their helium induced broken English, Spanish and gobbledygook.

Sandra Bullock did her best to bring the notorious Scarlett Overkill to life but her lines were not nearly as funny or memorable enough. She fell short of Jason Segel’s villainous Vector (“Curse you tiny toilet!”) and wasn’t even half as crazy as Benjamin Bratt’s brutish El Macho.

She had the odd one liner, “What are your names? My knights in shining denim”. But as she blathered on about her crusade for the Queen’s Crown Jewels, I realized how much I missed Steve Carrell’s Gru.

I couldn’t believe Jon ‘Don Draper’ Hamm was voicing Scarlett’s hub Herb. Completely out of character and lapping it up. He did his best to steal the show as the dimwitted scientist.

The sixties soundtrack was rocking, man. The Who, The Kinks, The Doors, Jimmi Hendrix. Loved it.

The premise was a little weak with our heroes, I mean villains, tasked with stealing the Crown Jewels. Cue a lazy montage of the Minions minion-ing up London as they breeze through a number of landmarks; The House of Commons, The Tower of London, Trafalgar Square. One little landmark did get a laugh that I didn’t expect.

BUT there just wasn’t enough. The gag ratio was low. Don’t get me wrong. The little devils still delivered in parts. Stuart wearing a thong while bathing in a hot tub with two yellow fire hydrants got a chuckle and the song and dance number homage to Singin’ in the Rain’s ‘Make ‘Em Laugh’ was brilliant.

I just felt that the writers went for lazy gimmicks. Resorting to old stereotypes for a quick titter. The whole British people with bad teeth and constantly drinking tea spiel has been done to death. I’m not just saying that as a Brit but come on! Really?

Not even the legendary Jennifer Saunders could save the day as Her Majesty. It was too OTT and just not funny. The bobbies on the beat running around with tea cups and shouting “Cor Blimey!” just infuriated me and the scene with the Beefeaters was just weird. No, seriously. It was a strange Full Monty-esque moment. Desperation?

The dark undertones were handled well. The macabre bumping off of “leaders” and the torture chamber scene luckily went over the little ‘uns heads. A joke involving Kevin and a noose may not have been the best thing for a kid’s film.

The Minions were always the funny scene stealers in the Despicable films but this movie proved that you can have too much of a good thing. And maybe that there was a reason why they were only minions.

It’s not all bad but it’s not that great. Disney and Pixar have proven time and time again that you can have films that appeal to everyone. This has enough for the little ‘uns but for the bigger kids (at heart) you may be left disappointed.