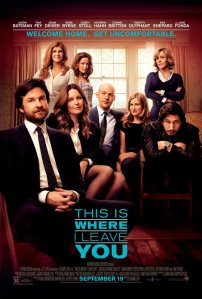 No, it’s not that bad. But not that great either considering the talent at Shawn Levy’s fingertips.

Levy’s projects have always been okay (Real Steel/ Date Night/The Internship). For some of you those titles might make you wince. The master of ground breaking comedy classics? Not even close.

The cast did their best with the material. It’s just a shame that the material is not that good. In all fairness, Levy takes a stab at family dramedy. But maybe he shoudn’t have.

AND if you wanted anyone to head a dysfunctional family, it would be Jason Bateman (Arrested Development/Horrible Bosses).

So what’s it all about? When their father passes away, four grown siblings are forced to return to their childhood home and live under the same roof together for a week, along with their over-sharing mother (Jane Fonda) and their spouses and exes.

Jason Bateman was brilliant. He carried the film in my opinion. His marriage breakdown story line was hardly original but it gave an extra something to the endless childish sibling bickering that dominated the majority of the screen time. How it was all resolved was a little predictable and terribly flat but at least there were a few dramatic moments to be had.

Tina Fey didn’t really deliver as much as I hoped. I know she’s funny. Come on, 30 Rock and Date Night proved that. It felt like she played it safe and stuck with the tame script which made her highly unmemorable, bar two little scenes. She worked well with Bateman and did her best but with her comedic prowess, you expected something a little better.

Adam Driver (What If?) was a much needed comedy injection. His lines were hardly comedy gold but his delivery and style managed to get a smile out of me. His relationship with Bateman made for an entertaining and endearing one.

Speaking of nothingy role, Timothy Olyphant come on down! Absolutely gutted after his terrific performance in Justified. His character was involved in a naff subplot that didn’t really go anywhere. This is what infuriated me with TIWILY. There were so many missed opportunities with the characters and the cast to make more drama and better story lines.

I know that this was adapted from a Jonathan Tropper novel. I can’t say how faithful the film is to its source material but it certainly hasn’t made me want to read it.

Some of the gags were just plain terrible. I mean the recurring joke of the little toddler moving his potty around to poop all over the house was just not funny. The little toddler himself actually was hilarious. His improvisation with some of the cast was brilliant. They didn’t expect him to retort back. More of that would have been perfect.

But potty-ing (I know it’s not a word. I’m not wasting any time finding another) around the house and flinging poo? Awww. No. AWWW – Are you kidding me? Put your potty in the bathroom, boy. Jeez.

Anyhoo . . . The sibling rivalry and tension wasn’t badly done. Everyone can relate to it in some capacity and the moments in which they look back and experience the old nostalgia make for some nice moments. One of the gags that should have been branded as just plain lazy actually entertained me.

A scenario involving some marijuana and a synagogue classroom actually allowed for a comical encounter between Bateman, Driver and Corey Stoll (Homeland). It was great to see Stoll have a bigger role and he doesn’t do a bad job as the stubborn older brother.

Ben Schwartz was incredibly annoying as the hyperactive Rabbi Charles Grodner or Boner to everybody else. Delightful. A guest that gets a giggle and then overstays his welcome . . . in almost every scene. Not even the (usually) hilarious Kathryn Hahn (Step Brothers/We’re The Millers) could save the day with her kooky momma hell bent on getting preggers. It was weak.

And Jane Fonda . . . Apart from having fake pumped up breasts to cue inevitable breast feeding gags, she was highly unmemorable. In fact, there was a bizarre revelation that occurs nearer the end of the film which doesn’t fit in at all. It didn’t work and just completely unnecessary. It was nothing more than a lazy plot device to stop the family scrapping. The only bit of real heated drama that got me interested.

Dax Sheppard (Without A Paddle) played the two-timing sleazebag well. But is this the only character that he can play? And to be honest, when he was first introduced with the Howard Stern DJ spiel, it wasn’t funny. Just annoying as hell. It made a change for Abigail Spencer (Suits) to play a more meatier role as the cheating wife. But the story line was so hammy and predictable, it never really hit the heights that you’d hope.

Rose Byrne (Damages) and Bateman had good chemistry but their love subplot was so generic and corny that I really couldn’t care. Tropper left their little romance so open as a feeble attempt to prevent the predictable outcome but just made it flat and uninteresting.

To be honest, this film only did one thing. Well, two. Waste my time. And make me realise how good August: Osage County was. If you want a good family drama, then I’d invest your time in that instead.

There is the odd moment to be had. One chuckle here, one little heart plucker there. But memorable and entertaining? Quotable and re-watchable? Meh.