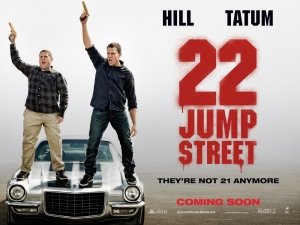 Jump to your nearest store or online outlet and see this movie!

Hill and Tatum reunite for a ridiculously OTT but incredibly funny sequel that has enough to match its predecessor and possibly surpass it.

Now Jump Street has never been (and never will be) subtle. If you like your comedies a little more subdued and less about sex and drug gags than . . . Why are you here?

Now I liked 21 Jump Street but felt it was a little overhyped. The way my brother bigged this movie up to me; I was expecting an Anchorman but it still delivered the goods.

What I loved about these movies is the blatantly obvious self-referencing, the ability to poke fun at itself and constant breaking of the fourth wall. This is perfectly demonstrated with Deputy Chief Hardy Nick Offerman (Parks and Recreation) explaining how the idiotic success of their last mission has led to their budget being doubled so they can do the exact same thing and hopefully yield the exact same results.

And boy do they! With crazy car chases, OTT action pieces, zippy one liners and laugh out loud gags from Jonah Hill’s wooing poetry slam to Tatum’s buffoonery. I always knew Hill would impress. You can tell where he improvises and it makes things all the better for it. There are a couple moments where the jokes have the tendency to go on a little bit.

I always found Tatum a little wooden in his other movies but whether it be the subject or his partnership with Hill; he has really come out of himself and is absolutely brilliant and they fantastically together.

It’s hardly perfect. The plot line is reversed to predictable if hilarious results. This time around, the inevitable happens in which Hill struggles to adjust to college life after his surprise performance at high school, while Tatum blends straight in, forming a bromance with another jughead that soon threatens to destroy the relationship of the dynamic duo.

I could list all the gags but hey, why would I do that? I was just pleased that this wasn’t a case of all the best bits in the trailer.

Ice Cube was actually very funny. I felt his typical angry bravado was used for its strengths this time around and he was given a little more screen time which allowed for some cracking moments.

Peter Stormare seemed to play a strangely out of place and generic villain. I mean the passing joke about what happened to the 90s works for those are familiar with his numerous bad guy roles back in the day but for anyone else, it will go straight over your head.

Patton Oswalt (King of Queens) was in a funny blink-and-you’ll-miss-it cameo as a teacher whose just received tenure. I just wish he was in it more. The alluring Amber Stevens (Greek) plays the love interest well and was able to be more than just a cliched cut out. The Lucas Brothers (TWINS! JINX!) were brilliant as the Yang twins. A memorable supporting role if ever there was one.

I found Jillian Bell quite irritating by the end. Her old guy jibes at Hill were funny (At first) BUT the massive punch up goes on far too long. I could respect the Mr & Mrs Smith parody nod BUT it got a little repetitive.

And of course, regular faces from the original (Well, original remake) pop up. Inevitably, the teasers were hinting for another sequel. IF the gags are this good, I’m happy to keep watching.

Keep watching the closing credits for a fantastic sequels gags. There was a surprising cameo from a certain comic actor.

I would have to say that this is one of the funniest films I’ve seen in a while. My name is Jeff! INVEST!