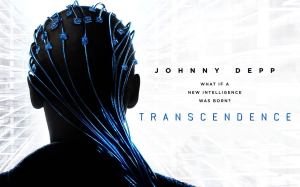 Transcen-dunce or dense. A mind numbingly drab affair of a concept that has just enough meat to be a generic TV movie you’d expect to see on late night SyFy. You know you’re onto a loser when the opening five minutes pretty much tells you what to expect and an established cast sleepwalk their lines and fail to make an impression. The list of contenders for worst film of 2014 keeps growing.

*WARNING POTENTIAL SPOILERS* A surprising . . . ly slow and spoilerific post-apocalyptic opening made for strange viewing, followed by a flashback piecing together the aftermath. Slow but go on. This is soon hit with mind numbing techno gobbledygook that even the normally prolific powerhouse that is Johnny Depp is so bored of explaining. Basically the gist is that controversial scientist Will Caster (Depp) is the foremost researcher in artificial intelligence who is working to create a sentient machine that combines the collective intelligence of everything ever known with the full range of human emotions. ZZZZZZ! However, this has made him the prime target of anti-technology extremists who will do whatever it takes to stop him. A crazy sporadic two minute killing spree soon stopped me fidgeting in my seat. Unexpected (if you don’t remember the trailer) and engaging, I thought here we go. Boy, was I wrong?

Their attempt to destroy Will inadvertently becomes the catalyst he needed to succeed. Fighting for his life, Caster becomes a participant in his own “transcendence” by uploading himself and becoming a power mad information feeding virtual freak. If I had known, the journey that was in store, I would have stayed at home. There is a surprisingly stale chemistry between the beautiful Rebecca Hall and Depp. It was as if writer James Paglan thought; well they are a couple, you must feel for them. We won’t enforce the feelings or develop them. Just insert some corny, generic couple-y moments that take up too much screen time. Once Depp is uploaded, he becomes a monotone and incredibly droll menace that dithers in the background. Hall does her best to carry the film with an impeccable accent. The divided loyalty and questionable motives behind the rebooted Depp made for potentially engaging viewing but it didn’t really go anywhere. An elongated and drawn out 45 minutes building up to Depp’s upload did not do any favours for patience. His drawn out complexion and wirey helmet (easy now) was reminiscent of a demented Hellraiser. Again, nothing surmountable.

I mean the battle and debate about the ever-growing potential of AI is always an intriguing one. “Was Caster really there at all or did the AI get too clever?” was intriguing at certain points. But at a whopping two hours, there just wasn’t enough with the inevitable ending vastly approaching. Fantastic to look at. The visual effects were good. A redeeming sequence in which “Caster” has managed to develop nano bots to create an army of super soldiers delivered the little action that appeared to be on offer with some more familiar supporting faces; Clifton Collins Jr (The Event, 24) and Josh Stewart (Criminal Minds, The Dark Knight Rises). However, there is one scene which had me in stitches, whether they ran out of budget or poor editing, one of the enhanced nano bots shows off his incredible talents by jumping up two steps on a ladder. If I could find it, I would show it. Hilarious.

That’s not all that’s hilarious. The story makes no sense at all. Cillian Murphy and Morgan Freeman do absolutely nothing to uplift this mess. Because their characters do absolutely nothing. Even though they are aware of the dangerous effects of Caster’s ever-growing power, they just look at charts, mumble some data mumbo jumbo, rush about at the end and . . . watch from the sidelines. Freeman proved one thing. That even with his dulcet tones, he can make any bad line good. “With one of the most advanced security measures in the world, my own team got killed by poisoned cake”. Paul Bettany’s character gets imprisoned by a terrorist cell. Sits about staring blankly into nothingness while being lectured at by Kate Mara’s cyber hippie terrorist. His motives become dreadfully unclear in which it skims forward two years and he’s joined the cell. Freeman even asks him how they got to him. A shrug. That’s all we get. A shrug. Something I fear the writer or director did while making this.

A dreadful directorial debut for Wally Pfister. Now Pfister is a talented cinematographer who has worked extensively with Christopher Nolan for the last decade on some of his biggest hits to date. With Nolan as executive producer, no one would have expected this. Pfister delivers a mess, a beautifully shot mess, but a mess all the same. Perhaps stick with the cinematography? Harsh, maybe. The idea was an intriguing prospect but a lack of pace, a plot holed story line with an inevitable ending is hardly going to make this a memorable film. I mean I’m going to remember this for the two hours I lost. This also marks another step down for the prolific Depp. He is still a talented actor and the argument that he has been poor since Dark Shadows is harsh. His performance redeemed The Lone Ranger in my opinion but it was still a flop. And this film will do him no favours. Perhaps a better look at the script before accepting the wonga. That’s the only reason why I think, or hope, that the cast took this.

It just proves that a little thing called story, along with some others called character, plot and interest still count. Sleep walking performances, along with a by the numbers story line, relying on the popularity of familiar actors does not a good or profitable movie make. I fear the memory of the film will transcend, evaporating like the little nano-bots into nothingness. Avoid or upload at your own peril. 1/5