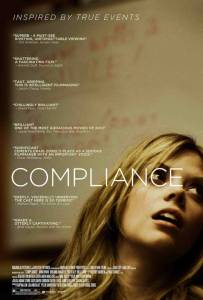 When a prank caller (Pat Healy) claiming to be a police officer convinces a fast food restaurant manager (Ann Dowd) to interrogate an innocent young employee (Dreama Walker), no one is left unharmed.

The film’s theme focused primarily on manipulation and human gullibility. The lengths that someone would go to if ordered by a voice of authority. A frightening concept at first glance. What started off as a tense, atmospheric and chilling thriller collapsed into a flat, strange and questionable affair.

Ann Dowd (The Leftovers) gave a great performance as the baffled manager. Desperate to honour her civil duty BUT weary of the brewing situation. The opening was intriguing as Dowd’s Sandra interrogated one of her employees Becky (played by the lovely Dreama Walker – Don’t Trust the B* In Apartment 23).

Tension mounted when the “officer” in question, played creepily by Pat Healy (Cheap Thrills), was revealed quite early into the mix. BUT for all the promise and suspense, this little prank scene soon went on far too long and became more and more ridiculous as the 90 minute mess trailed on.

Despite a great cast and a creepy concept, I soon found the whole thing very tedious. As much as I pondered the question, “What would you do if an officer ordered to do things in the interest of an investigation?” I could honestly say, I don’t know. Easier said as a spectator. BUT red flags would have been flying when the “officer” requested that I perform a strip search on an employee. Come on.

For all it’s peculiarity, I couldn’t stop watching. Only to see how far the madness went. Once the situation was cross examined in a somewhat flat finale, I was left undecided. If the notion of the Milgram experiment is in fact true, in which a person can be coaxed into doing anything by a simple voice then that is truly haunting.

The revealing stats at the end were the most shocking thing out of this. I can’t believe that this was based on true events. Apparently 70 similar incidents have happened across 30 states. BUT it still remained unconvincing. The opener suggested a Phone Booth scenario BUT by the end Craig Zobel’s (Z For Zachariah) execution disappointed.

This was one to talk about. BUT for the right reasons? I’m afraid NOT.

One thought on “COMPLIANCE REVIEW”